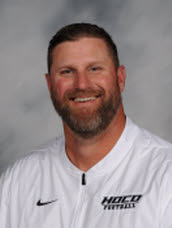 This year marks Coach Crawford’s third year as the Varsity Head Football Coach/Athletic Director at Houston County High School, where he also served four years as the Defensive Coordinator, for a total of seven seasons. During his tenure as the Defensive Coordinator, the Bears won back to back county and city championships, the 2015 Region Championship and reached the GHSA State Playoffs three out of the last four seasons.Prior to coming to Houston County, Coach Crawford was a member of the coaching staff at Northside High School for eight years. During this time, Northside, considered one of the winningest programs in the state of Georgia, won seven region titles, was State Runner-Up two times and won two State Championships. The Northside High School football program had a combined record of 103-8 during those eight seasons. With hard work and dedication, Coach Crawford worked his way up the coaching ladder at Northside under the tutelage of Coach Conrad Nix and Coach Kevin Kinsler. While coaching at Northside, Coach Crawford had the opportunity to mentor and work with several college football players, including three current NFL players. Coach Crawford began his coaching career in 2002 as an assistant coach at Brooks County High School followed by a two year stint at Tattnall County High School.Coach Crawford’s philosophy and mission at Houston County High School is to assist in the development of young men, while providing the best opportunity to build character and integrity within a culture of greatness on the football field, in the classroom, within the community and for the future. With sixteen years of coaching experience under his belt, Coach Crawford is looking forward to the challenge of continuing the HOCO Bears successfulness as one of the top programs in 6-A.He and his incredible wife, Angela, the former Head Softball Coach at Houston County High School, have been married for thirteen years and have three beautiful children: Cole (11), Brock (8) and Jackson (6).Thanks for your continual support of the HOCO Football program and athletic department. Coach Crawford would like to welcome you to Bear country and always remember to BEAR DOWN!