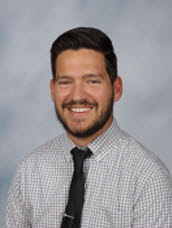 Bio
Mr. Rob Ingram is entering his second year teaching and his first year serving as the Assistant Director of Bands at Houston County High School. At HoCo, Mr Ingram, is the conductor for the Symphonic Winds, Concert Band II and assists with teaching the Black and Silver Brigade. Prior to his appointment at Houston County, he served as the Director of Bands at Mount de Sales Academy in Macon, Ga. While at Mount de Sales he was responsible for  teaching beginning band, Middle School Concert Band, Upper School Concert Band, and directing the Marching Cavaliers.
Mr. Ingram earned his Bachelor’s Degree in Music Education with an emphasis in Instrumental Music from Georgia Southern University in 2016. While at Georgia Southern Ingram, was the Drum Major of the Southern Pride Marching Band, lead alto in the Jazz Ensemble, and Principal Saxophone in the Symphonic Wind Ensemble. Mr. Ingram currently plays saxophone in Wellston Winds, a community band here in Warner Robbins.
Mr. Ingram's wife, Cassie, is also in her first year teaching Algebra 1 at HoCo. In March they will be celebrating their first wedding anniversary. They have two dogs Maggie(5), and Eleven(3).